…that is all you need to work effectively!

The mockup activity (or prototyping) is part of a user-centered design approach. And the « Wireframe » has become over the years one of the most favorite artifact of User Experience specialists to communicate a concept, verify design assumptions and testing various options or validate ideas and usability decisions … 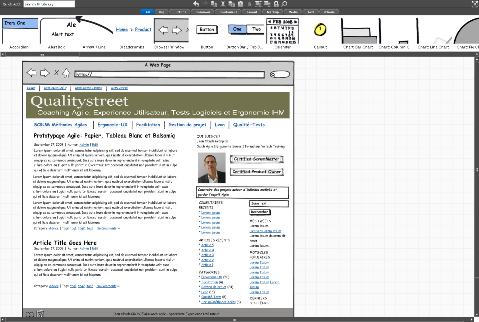 Example of wireframe with Balsamiq: my french blog

A wireframe is a « low fidelity » prototype. This non-graphical artifact shows the skeleton of a screen, representing its structure and basic layout. It contains and localizes contents, features, navigation tools and interactions available to the user.

The wireframe is usually:

Various tools can be used to create wireframes (with different format and level of fidelity), from the simplest to the most sophisticated ones, free or not…

Just enough is the best…

I’ve seen too many projects (led by traditional development methods) in which a wireframe was one of the numerous artifacts of the project, just additional documentation, created solitary by a single person, aiming at replacing dialogue and conversation between people. What a waste…

But I’m also always amazed when I intervene on a agile project as a coach to observe that wireframes are rarely used. Moreover, design & specifications workshops,  interactions, conversations, feedbacks between Product Owner and team  are not effective, partially or not done. What a waste…

The winner of the « the best prototyping tool award » is actually… a Trio!

The real strength of the wireframe lies in its ability:

So, wireframes help to generate feedback, to see potential problems with an interface and to clarify conditions of satisfaction.

quick collaborative wireframes on the WHITEBOARD,

and rapid sketching activities with BALSAMIQ,

are by far the most effective.

On Agile projects (with short sprint lasting 2 or 3 weeks), this is not only an option!  Rapid and valuable prototyping in order to foster collaboration and elicit rapid feedback is a must.

Exploring, illustrating and understanding ust enough, just in time… wireframes should be adjusted in terms of scope, details, timing and level of fidelity with a special focus on feedback, collaboration and interactions. This is probably the reason why I abandoned tools like Microsoft Visio and PowerPoint or Axure RP Pro or PowerPoint that have long been my preference but which are mostly inappropriate in the Agile contexts …

Paper prototyping is probably the fastest and easiest form of wireframes but not the least effective. Direct, simple, visual, cheap, enabling rich feedback, paper wireframes focus above all on collaboration and proximity. 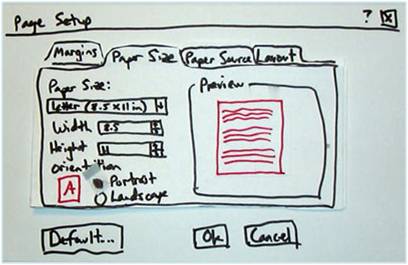 Complexity of the format varies from one context to another, as highly developed paper prototypes can be created with proper equipment, good preparation and facilitation. Interactive paper prototyping sessions offer other benefits: direct manipulation, interactivity, playfulness and creativity. 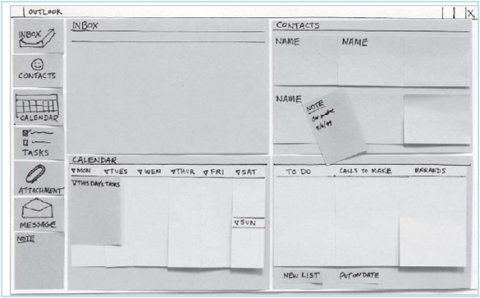 Larger collaborative workshops (focus on prototyping) can be very valuable both for design and testing activities. 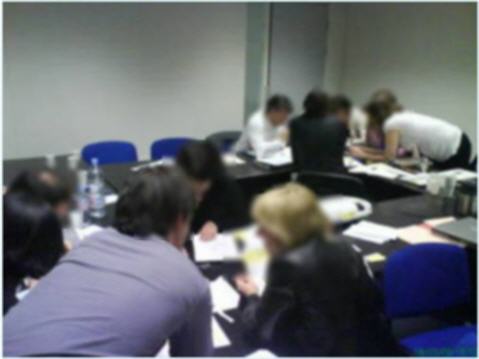 Design workshop. We divided the group into sub-groups (45 minutes preparation for the first round - 15 minutes presentation)

Simplicity is both a value and a strong principle of agility. Paper prototyping is a solid practice of Agile teams 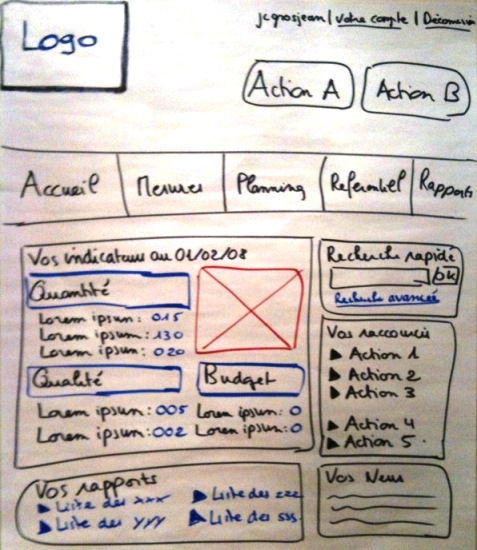 Teamwork on the whiteboard is one of the most efficient form of communication. 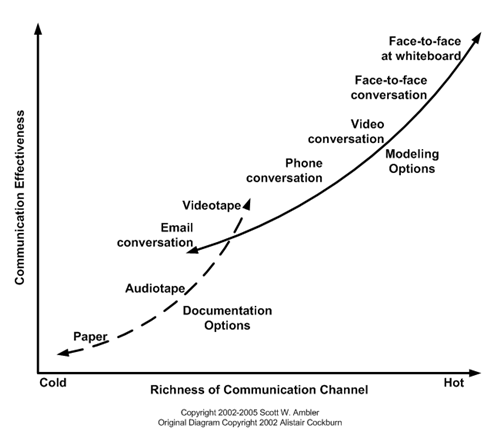 Collaborative specifications workshops around the whiteboard are intense and highly valuable: 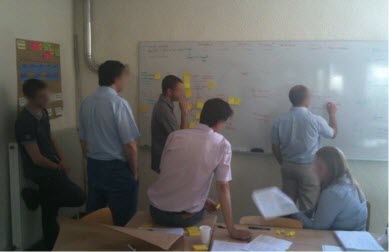 Some are dedicated to the scope (user stories) of the current sprint; other (also called Product Backlog refinement) serve to explore, refine, model collectively user stories envisioned for the next sprint. Some teams I coach organize this specification workshop, just in time, the last day of the current sprint (i.e. Friday afternoon) after the Sprint review & Retrospective in order to be ready for the Monday sprint planning.

Other teams organize it in the middle of the sprint in order to have time for requirement exploration, testing, business modeling or quick user research…. 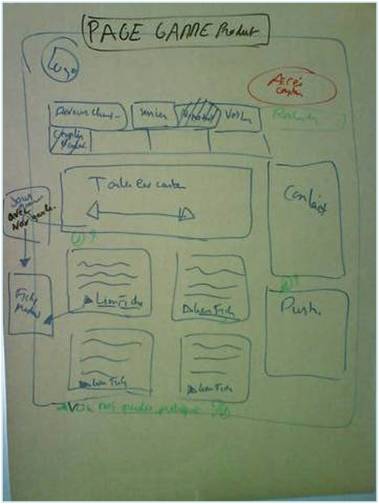 Design & specification workshops give the necessary context and conversational elements so crucial to User Stories. They enable to illustrate and clarify the conditions of satisfaction while delivering valuable examples.

Take a picture of the results with you camera, and you have a useful element to associate with your user story description written in the wiki!

Balsamiq is an electronic tool that I recommend to agile teams (complementary with paper and whitebooard). Easy to use and allowing very rapid sketching, the application presents a large library of UI components (build-in and from the users’ community), many templates, export possibilities and precious plugins for Confluence or  Jira users.

Example of wireframe with Balsamiq

I use the tool with several co-located team and in distributed contexts offshore via screen sharing: in both cases the contribution of the tool was welcomed by teams and Product Owners « a useful tool that serves human activities« .

The sketchy format also has its interest: it lets you focus design conversations on functionality. No risk to forget the reality!

You must focus on your working software deliveries to measure you project progress. Wireframe is a communication tool.

Balsamiq Mockups can be used to model any type of interface: web portal and websites, software application, mobile interfaces…

This is not a free tool but the price / quality ratio is excellent.

… the team is now sprint#9, one week before the end of the release. 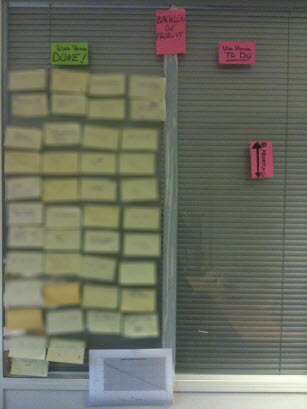 Product Backlog: no "To do" items remaining! 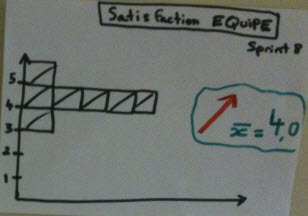 Team Satisfaction High : "I am glad I’am part of the team and satisfied with how our team works together" 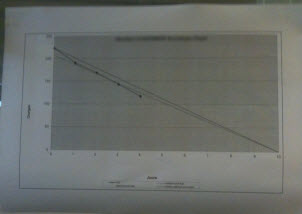 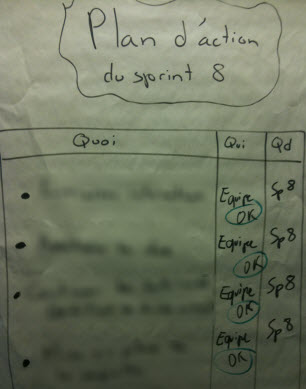 Actions items are tracked. Everything was done at the end of the sprint. The poster was displayed on the wall during the sprint. 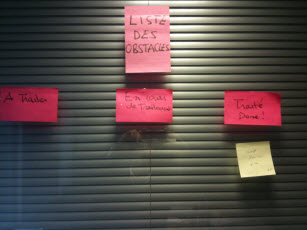 Just that it was a pleasure to coach such a good team! Thanks you guys.

I usually say to Agile teams that the most important outcome of a sprint (or release) retrospective (but also important workshops), is the Action Plan.

Both past and future oriented, the SCRUM retrospective meeting aims to discover what the team did well, understand what went wrong, and to find ways to improve. It’s an important and intense exchange and communication event.

But completing an action plan, at the end of the retrospective, is the only way to make it fully successful and to engage the team in a continuous improvement approach (Inspect & Adapt) for better performance.

Only a short list of actions (4 max) and three columns that make it simple and effective.

Build in collaboration on a large sheet of paper. At the end of the meeting, the action plan will join the team’s information radiator, into the team’s workplace to make it visible every day by everybody’s eyes. Communication is crucial for continuous improvement, and visual management is an effective strategy to make the follow up and to maintain engagement.

At the end of the next sprint, actions items of the previous plan will be reviewed: Done or KO…

Of course, the actions included in the « what » column are SMART:

Then, I like to get the team’s commitment to the plan before closing the meeting and doing the ROTI (Return On Time Invested).

What is Agility? The definition of the agile organization

The question arises regularly… so here’s my own definition of agility:

« Agility is the ability of an organization to create value and to continuously delight the customer, while promoting and responding to change in its environment »

This broader definition completes a recent quote of my fellow french blogger Claude Aubry* on Twitter, and adds  to Jim Highsmith’s definition ( »Agility is the ability to both create and respond to change in order to profit in a turbulent business environment » 2002) or Craig Larman’s definition (« Rapid and flexible response to change » 2004). While I found these good definitions very inspiring, I was missing something…

I was missing the CLIENT, the primary goal and core foundation of an organization, the means to align employees to a common vision and the key differentiator against competitors. Indeed, in today’s world of complexity and competition, the challenge is not only to deliver value early but mostly to continuously delight his primary customer.

This is the only viable purpose to be successful in the long term. For this, the agile organization must be both proactive, active and reactive, supported both by lean, agile and user eXperience practices.

Of course « being agile » is also a mindset based on core values: communication, feedback, courage, simplicity, respect and the four from the Agile Manifesto.