If France wins the world Cup next sunday, we’ll know why:)
The team handles the notes with dexterity, you can do IT!
So like them,

I usually say to Agile teams that the most important outcome of a sprint (or release) retrospective (but also important workshops), is the Action Plan. 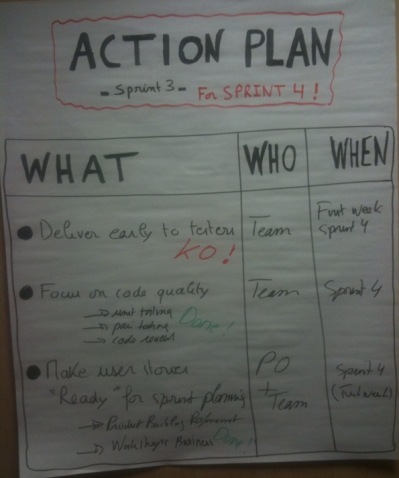 Both past and future oriented, the SCRUM retrospective meeting aims to discover what the team did well, understand what went wrong, and to find ways to improve. It’s an important and intense exchange and communication event.

But completing an action plan, at the end of the retrospective, is the only way to make it fully successful and to engage the team in a continuous improvement approach (Inspect & Adapt) for better performance.

Only a short list of actions (4 max) and three columns that make it simple and effective.

Build in collaboration on a large sheet of paper. At the end of the meeting, the action plan will join the team’s information radiator, into the team’s workplace to make it visible every day by everybody’s eyes. Communication is crucial for continuous improvement, and visual management is an effective strategy to make the follow up and to maintain engagement.

At the end of the next sprint, actions items of the previous plan will be reviewed: Done or KO…

Of course, the actions included in the « what » column are SMART:

Then, I like to get the team’s commitment to the plan before closing the meeting and doing the ROTI (Return On Time Invested).